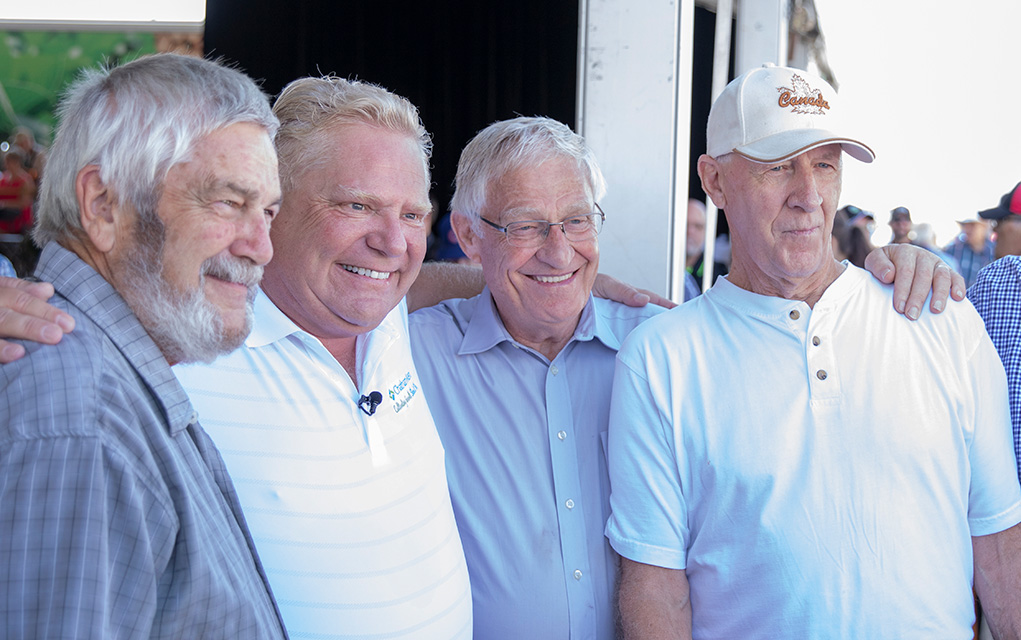 All Ontario premiers are always sure to attend the ‘International Plowing Match and Rural Expo’ held each year in the province. After all, it’s a very high-exposure opportunity to be associated with farming.

This September however, during their visit to the event, both Premier Doug Ford and new Ontario Minister of Agriculture, Food and Rural Affairs (OMAFRA) Ernie Hardeman met with representatives from various ag groups at a roundtable, discussing the challenges currently faced by farmers and ways in which Ontario agriculture can grow and diversify in the global market. Stakeholders at the event included Ontario Pork, the Ontario Federation of Agriculture (OFA), Grain Farmers of Ontario, Beef Farmers of Ontario, Chicken Farmers of Ontario and the Ontario Agri Business Association.

In the event press release, Ford promised, “I will use every tool at my disposal to help the agri-food sector grow…Ontario is open for business, and I will not leave our farmers behind.” Hardeman added that, “For too long rural Ontario was an afterthought. Our government is committed to listening to farmers…as we work to strengthen the agriculture industry.”

Schwindt says Ontario Pork well understands the “serious fiscal situation in this province” and that the pork industry wants to be part of the solution. “But,” he asserts, “there has to be a conversation to which everyone can contribute,” and that “Ontario Pork certainly believes that all commodities should benefit equally.”

For his part, although he notes that “it’s still early days,” Ontario Pork Board Chair Eric Schwindtsays Ontario Pork is encouraged that Premier Ford wants to work for farmers. “Hardeman has also been a long-time supporter of agriculture,” Schwindt adds. “He’s been an MP in Oxford County for many years and he was Minister of Agriculture in the Mike Harris government, so he’s a good choice.”

It’s still early days, but we are encouraged that Premier Ford wants to work for farmers. ~Ontario Pork Board Chair Eric Schwindt

Among the current provincial government’s promises, one that particularly pleases Ontario Pork is an increase by 2020 in annual funding of $50 million to the Risk Management Program. “As an industry, we can do a lot to prepare for ups and downs in the market, but this is the only effective program to deal with large fluctuations in market price,” Schwindt explains. “The extra funding is appreciated, but the devil is in the details and there must also be program design changes that better address farmers’ needs.” These includemore response in times of need and the ability to carry-over unspent funds to make the program more like insurance.

Ontario Pork is also encouraged that the government has eliminated the provincial carbon cap and trade program, and is hopeful that going forward, there will be different ways to accomplish the same goal with less economic impact. “We compete in the world market and as we make changes to reduce global warming, we very much need to stay competitive with other jurisdictions,” Schwindt says. “We want to do our part, and we are encouraged that the provincial government isn’t going to impose taxes or regulations that would put us at risk of going out of business.”

From the Ontario Federation of Agriculture (OFA) perspective, President Keith Currie says his organization has had some positive conversations with the government about what the new carbon plan will look like, and like Schwindt, he’s confident agriculture’s needs relating to carbon emissions will be much better received than previously. A long-standing request, for example, is moving forward to have natural gas used on farms and in greenhouses exempt or almost exempt from any future carbon tax plan.

Hardeman notes that in addition to this, his government is working with the private sector to expand natural gas and broadband networks to more communities, as well as reducing gasoline and hydro rates to make it more affordable to do business and live in Ontario. “We want to ensure policies and programs will help the agri-food sector grow their businesses and avoid additional regulatory burden or costs,” he says. “We have already taken some of the first steps to…promote economic growth. We’re also advocating for Ontario’s farmers and processors on a national level. These initiatives are all part of the province’s plan to make Ontario open for business, grow the economy and help protect and create good jobs across the province.”

Currie notes that this all fits well with the ‘Producing Prosperity’ campaign that OFA introduced to politicians and would-be politicians over a year ago. Like the plan that Hardeman describes, it’s focussed on economic development for rural Ontario that will help farm businesses succeed, specifically through job creation, affordable housing and environmental sustainability and food security.

Ontario Pork hopes there are many avenues the provincial government could take to reduce compliance issues for pork farmers, including, says Schwindt, the reduction of “redundant paperwork related to nutrient management, without compromising any of the environmental integrity of the current rules and regulations.” Another opportunity for cutting red tap relates to pork industry worker shortages. “While we always look to hire locally first, many producers and processors need the help of temporary foreign workers to fill positions not wanted by locals,” Schwindt explains. “Current immigration rules make it really difficult for these farm workers to stay and keep working beyond their temporary work permits, even if they decide they want to settle and build a family here in Ontario.”

At this point, OFA is encouraged at how the new provincial government – and in particular OMAFRA – is working to reduce regulatory burdens. “We are hopeful that we can continue to adjust and tweak regulations that are posing operational changes to our farm businesses,” says Currie, including changes to the employment standards act as another example.”

I will use every tool at my disposal to help the agri-food sector grow… Ontario is open for business, and I will not leave our farmers behind. ~ Premier Doug Ford

For his part, Hardeman acknowledges that he heard many concerns about red tape and the need for nimble, efficient regulations at the roundtable discussion, as well as “concerns about labour and the unique labour environment required for our farm and agri-food businesses to remain competitive. Some of those concerns are now being addressed through the Making Ontario Open for Business Act.”

Other issues and the big picture

Ontario Pork would also like the Ontario government to be involved with better prevention of animal disease from abroad, as well as better regulation of protests. “With protesters approaching trucks, especially in the winter, it’s dangerous because drivers can’t see them, and there are also food safety risks,” Schwindt says. “The rules of engagement should be that people have the right to protest and stay safe, but our transporter’s safety and that of our animals also needs to be protected.”

Currie notes that there have been some changes to predation regulations for livestock farming and that OFA is continuing to work on more changes to achieve better loss compensation through the Ontario Wildlife Predation Compensation Act. In addition, since Doug Ford was elected, OFA has also been able (with OMAFRA’s help) to start the reversal process of an action by the previous government relating to rabies vaccinations. These regulations, Currie says, made it very difficult to take animals to shows and exhibits or hold farm tours without having to have all animals vaccinated.

In the end, Schwindt is of the view that no matter what issues should be addressed by the government, the most important thing is “to be in the room” – to be part of driving solutions and creating policy. “We continue to talk to Minister Hardeman, his staff and to our partners at OMAFRA. The pork industry has a reputation for being proactive and helpful in these conversations and we want to continue that. We’re excited about the opportunities to grow and become a larger part of the province’s economy.”